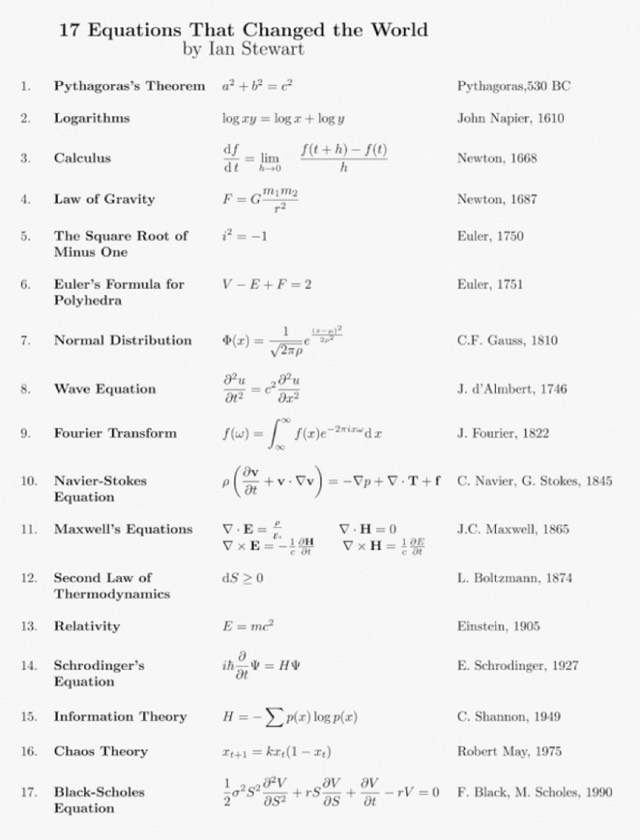 In the book In Pursuit of the Unknown, Ian Stewart discusses how equations from the likes of Pythagoras, Euler, Newton, Fourier, Maxwell, and Einstein have been used to build the modern world.

I love how as time progresses, the equations get more complicated and difficult for the layperson to read (much less understand) and then Boltzmann and Einstein are like, boom!, entropy is increasing and energy is proportional to mass, suckas!

A few days ago, The Daily Beast published an article entitled "Your Craft Whiskey Is Probably from a Factory Distillery in Indiana," by Eric Felten.

Felten is not some general assignment reporter stumbling through his first whiskey story. He is the James Beard Award-winning author of How’s Your Drink? Cocktails, Culture, and the Art of Drinking Well. He understands this issue, as do most of the folks who read this blog regularly. I am one of the people Felten interviewed. It's a good article.

The Daily Beast is a popular general interest site so a lot of the people reading Felten's article are those who need to receive its message. Craft whiskey is a cool, new thing. There are many cool, creative people doing amazing things with whiskey and other spirits. They are bold, adventurous, talented, sometimes kookie. It's a fascinating new trend.

So, naturally, there also are a lot of slicksters out there trying to rip it off, trying to get consumers to think they are artisans when they're really just scammy marketers. They copy the trappings of craft distilling. They jabber on about craft and care and expensive ingredients and handmade this and that when all they did was buy a 500 gallon tote of aged whiskey and bottle it.

Except for true craft distillers, whose output is very small, all of the bourbon made in America is made at one of 13 distilleries owned by eight companies. For rye you can add one or two big Canadian distilleries to that list.

It's true that some of the scammers sell some pretty good whiskey. In fact, the saddest thing about this whole story may be that many of the scammers are selling a better product than the real craft distillers. How's that? Making good whiskey is hard and many of the true craft whiskeys are works in progress. Others are deliberately going for unique and unfamiliar flavors. Some of it is tough to drink.

That, however, is not the point. The point is that if you want to buy a whiskey made by a craft distillery, you should be able to do so without a bunch of poseurs blocking your way. That's why I write about non-distiller producers and Potemkin distilleries, and why writers like Felten pick up on the story and report it for a general audience.

None of which explains the headline of this post. To understand that you need to scan the comments to Felten's article. You'll find things like this:

"Apparently Mr. Felton believes that only the super-rich should be allowed to start up distilleries. It takes approximately $10M to start up and fund a distillery for the 5-10 years he demands before the distillery is even allowed to sell its first bottle. Talk about snobbery."

"What does it matter if it actually tastes good and is well distilled and refined? It is a bit misleading to imply craft whiskey is 'probably' made at that distillery in Indiana."

"What does it matter? The company who is lying about their product is making a hell of a lot more money by pricing it as if they made it. A good fake Chinese Rolex looks just like a real one, why pay for a real one? However if the fake cost as much, would that be okay?"

"I think actually if the feds were less involved then small distilleries could spend more time and effort on their craft instead of paperwork and red tape. Does the gov stop your supermarket from selling store brand corn flakes made by another company?"

"When you can't sell your spirit on its own qualitative merits, talk about the big, bad things the other guys are doing. Give me a break."

Often it gets much uglier than the samples above. Very often, people who have been suckered by a Potemkin attack the messenger instead of the actual liar. Once a guy in a bar was ready to punch me because I told him that not one drop of Templeton Rye was distilled in Templeton, Iowa. He only stopped when he noticed how huge I am. Breckenridge is another Potemkin with a very loyal and belligerent following. Nobody has any contrary facts, just a lot of passion.

I've been accused of being a toady for Big Whiskey, and much worse. It's a bit nuts but once again, for everyone who has missed the point, there is nothing wrong with buying and bottling whiskey bought from a real distiller, if you tell the truth about it. If you're lying instead, or not lying but feverishly obfuscating, you better make your money fast because you won't get away with it for long.

Fidtz
reply
In 3 years time, Star Wars will be 40 years old. In 5 years time the Phantom Disappointment will be 20 years old.

I am this guy/ghost.
Louisville, KY

How Little We Know: Big Gaps in Psychology and Economics by Amy Rogers
Thursday May 22nd, 2014 at 6:06 PM

Seth’s final paper “How Little We Know: Big Gaps in Psychology and Economics” is published in a special issue of the of the International Journal of Comparative Psychology (Vol 27, Issue 2, 2014). This issue is about behavioral variability and is dedicated to Seth. Abstract of the paper follows:

A rule about variability is reducing expectation of reward increases variation of the form of rewarded actions. This rule helps animals learn what to do at a food source, something that is rarely studied. Almost all instrumental learning experiments start later in the learning-how-to-forage process. They start after the animal has learned where to find food and how to find it. Because of the exclusions (no study of learning where, no study of learning how), we know almost nothing about these two sorts of learning. The study of himan learning by psychologists has a similar gap. Motivation to contact new material (curiousity) is not studied. Walking may increase curiosity, some evidence suggests. In economics, likewise, research is almost all about how people use economically valuable knowledge. The creation and spread of knowledge are rarely studied.

The family is grateful to Aaron Blaisdell Ph.D. who completed final edits to Seth’s final manuscript for publication.

thegermanfor: The German for the act of spoiling something whilst in the process of trying to improve it is verschlimmbessern.
Tuesday January 21st, 2014 at 1:37 PM

The German for the act of spoiling something whilst in the process of trying to improve it is verschlimmbessern.
Read the whole story

Skotte
reply
"Automation" is in my job title.
Rochester, Earth

jmoodie
reply
I got to be pretty decent at spotting this curve while at UMB, and then avoiding it. But there is no doubt about its existence.

This is my weakness. I'll gladly write a script or macro to accomplish a repetitive task even though doing the task by hand would take half the time. Coincidently, this is why I use Vim, because it reduces the distance between manual and macro editing. Of course, it took me weeks to set up and learn to use Vim. That's time I'll likely never recoup.
Escondido, CA

Satri
reply
Ah.. The things you own end up owning you...
Montreal, Canada

bsag
reply
Horribly true. Been there, done that.

satadru
reply
The multi-axial solution is to delegate your yak-shave. Alternately optimize using the "has somebody automated/done this in a good enough fashion" algorithm.
New York, NY

stefanetal
reply
How the boss views most projects. And how I view his project proposals...
Northern Virginia

JayM
reply
Ha. :) For some folks this is definitely true!
Atlanta, GA

Best definition of automation I have ever seen...
Singapore

amijangos
My thought exactly, you have a threshold of how much time to invest

Title text: 'Automating' comes from the roots 'auto' meaning 'self-', and 'mating' meaning 'screwing'.
Hong Kong
Next Page of Stories